More Being Learned About Genes and Autism 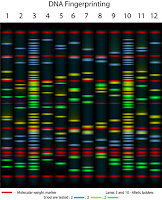 Many different genes influence development of autism spectrum disorders (ASD). Now, researchers at Hebrew University in Jerusalem report that a network based on the expression pattern of genes across different brain areas indicates that certain groups of genes are expressed in a similar pattern across the brain. That suggests that they are involved in the same processes or types of cells, said Sagiv Shifman, Ph.D., and graduate student Eyal Ben-David, in a report in the March PLoS Genetics.

"[T]the strongest enrichment [of genetic risk factors] was discovered in a group of neuronal genes that are involved in processes of learning and memory and are highly expressed during infancy,” said the researchers. “Further study of this group of genes has the potential to reveal a more detailed picture of the neuronal mechanisms leading to ASD and to provide knowledge required for developing diagnostic tools and effective therapies.”

For more in Psychiatric News about advancing knowledge regarding genetics and autism, click here.